March: You will be notified if you have been hired.

Savio Shepherds are college-aged staff that will work directly with the middle school teens during Camp Savio and the high school teens during Camp Bosco. A parish will be assigned to each shepherd, as well as other jobs throughout the week. Staffers chosen for this position will need high energy and lots of patience. It is physical, as staffers will interact in all activities. 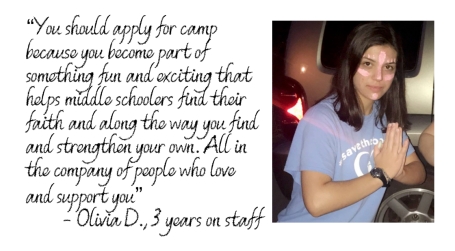 Savio Servants are high school-aged staff that will spend most of the time preparing the campus for camp: set up each day’s activities and take down at the end of the day. Some in this position will be in the kitchen preparing the meals or cleaning the dishes. Others will be asked to take photos, videos, or run the store. Camp would not be able to happen without this group. During Camp Bosco, this group has the opportunity to attend as campers.

No incoming links found yet.